The buildings at 115-119 East Gay Street were owned by the Smith Family since the civil war. Ron Smith was a realtor and Ashton Smith was owner/director of a funeral home and the building was used as a funeral parlor and furniture store.  Ashton’s grandfather was a hard working furniture maker who built coffins for soldiers and war heroes. The trade was passed down to the next generations.   Zukin Realty bought the building from Ashton Smith in 1998 and restored it throughout the years.  When we first bought the building it was hard to rent as many people were afraid it was haunted by ghosts and spirits.  However, now the charm and history of the building have made it one of the most popular places to dine at the restaurant (currently The Social) and live in one of the apartments above. 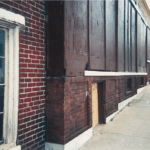